Evo Morales reelected for the third term as President of Bolivia

Evo Morales reelected for the third term as President of Bolivia

President Evo Morales swept the elections with over 60% of the votes, easily defeating his nearest rival  Samuel Doria Medina who got just 25% in the elections held on 12 October. His party Movement for Socialism (MAS) got more than two thirds majority in the Congress. Morales had won with 53.7% votes in 2005 and with 64.2% in 2009. He is the first President who has won in the first round with such a large majority in the last forty years.

There are many explanations for the success of Morales, who has become the longest-serving Bolivian President. But the simplest is the fact that he is from the poor native indigenous community while his main opponent is a rich white businessman. The indigenous people form 60% of the Bolivian population and they are the poorest. The whites form 15% of the population and are well-off. What is surprising is that despite being the majority in the population, the natives were completely marginalized and discriminated politically and economically for the last five centuries by the people of European-origin. It was Evo Morales who ended this historic domination by becoming the first indigenous President.

It was due to Evo Morales that the number of people below poverty line has come down by 32% from 2000 to 2012. A report*of UNDP has put Bolivia as the most successful in reducing poverty in the last decade in Latin America.

Although the west has labelled him as a radical leftist, Morales has managed the economy prudently and pragmatically. He has financed his pro-poor programmes with the increase in revenue from exports, taxes and better financial management. He has ensured fiscal surplus every year since 2006. The GDP of Bolivia has grown an average of five percent from 2006 to 2013**. It grew by 6.8% in 2013 and is projected to grow by 5.5% in 2014 and 5% in 2015. The foreign exchange reserves have increased from about 3 billion dollars in 2006 to 14 billion in May 2014. The inflation of the country which in the eighties had touched five digits has been brought down to 6-7%. The lending rate is a decent 7 % in contrast to the double digit rates in Brazil, Argentina and Chile. External debt has been controlled and kept at 7.7 billion dollars without any significant increase from the 6.2 billion figure of 2006. Financial Times of 15 October*** has said, ' Mr Morales may well be Latin America's most successful socialist presidents ever'.

Bolivia has never had such a long period of political stability and economic growth as it has experienced in the last eight years under President Morales. The country which is the poorest in South America had been notorious for coups and political instability. 36 of the 83 governments in the past had lasted a year or less. Between 2001 and 2005 there were five Presidents.

Understandably, the white politicians and businessmen have not reconciled to the democratic logic of a President elected from the majority of the population. They have been plotting along with obvious outside support to destabilize Morales' government in the last eight years. The rich province of Santa Cruz, along with a few others, even tried separation from La Paz. But Morales has survived due to the solid support of the indigenous people and to the support given by the South American Union UNASUR

The United States is unhappy with the coca leaf worshipping Morales who has stopped the forced eradication of coca farms in the country and calls himself as the 'worst nightmare of US'. One of the US ambassadors had campaigned against Morales in the previous elections and he retaliated by expelling him and closing the offices of the US Drug Enforcement Agency office and US Aid. Morales stood upto even Lula and the mighty Petrobras and managed to get a higher price for the gas exported to Brazil.

He has been campaigning for the global recognition of the legal rights of people in his country to grow coca which is considered as a sacred plant and consumed by Bolivians like betel leaves and tea in India. The UN Narcotics Control Agency, with the support of the cocaine consuming countries, have been against his move.

Morales comes from a poor family and rose as a  leader of the coca-cultivators union. He continues to live as a simple person with, of course, the Latino passion for football. Even now he plays football as member of a Bolivian team.


Bolivia was in the spotlight in India when Naveen Jindal went there announcing a two billion dollar investment in the El Mutun iron ore project. Unfortunately it was a failure due to faults on both the sides. India's trade with Bolivia is not significant but there is good scope to increase exports.

The victory of Evo Morales is not only cherished by the native Bolivians but it is also an inspiration and matter of pride for the forty million indigenous people of Latin America as well as those in the rest of the world. Last month Morales was the guest of honor at the international conference of the indigenous peoples of the world organized by the United Nations in New York.

Great to see this analysis Ambassador. And the links also help quite a bit. 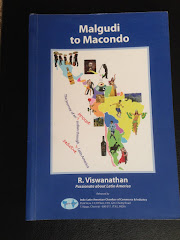